The Secret Black Auto Culture: Not Just About Low Riders 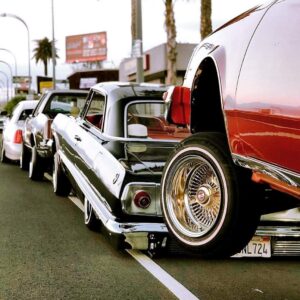 The Secret Black Auto Culture: Not Just About Low Riders

Lowriders – what comes to your mind when you hear the word? Black men with long chains dangling from their neck blasting high volume music from the cars, right? Well, to be honest, most of the people I ask give the same answer and that is what I think too. Lowriders have long been associated with African-American people and that is true to some extent. Most of the lowriders are people of color, even though this trend has spread far and wide.

When you talk about lowrider, it is a car that has been modified to show one’s cultural expression, but not a person. Even though associating lowriders with African-Americans is not a new thing, it is not the only association they have with the Automobile industry. This does come as a surprise as up till 2015, about 20% of the total African-American population did not have a car to themselves. This was very disturbing then, African-Americans made up almost 13% of the total population of America.

Even today, the only automobile company owned by any African-American was
C.R. Patterson & Sons. It was founded in 1915 and still is the ONLY, I repeat ONLY Black-owned Car Company in America. Firstly, it started as a carriage making company which later started to make cars. This shows how big a gap there is in the industry that no other African-American owned automobile company has come into existence let alone made it big! When you see the car racers, a very low percentage of them are of color. Wendell Scott and Jesse Iwuji are the only two African-Americans in the NASCAR series currently.

Having said that, it does not mean that Black people don’t have an influence on the automobile industry. The biggest example is the case of Chevrolet. The car modification culture has started largely from the Black community. They have been modifying different models of the Chevy for more than 50 years now. It has become a culture and norm for the Black community to modify these cars and enhance and improve their features. This in turn gives the car a sense of individualism and personality, making the car and the owner stand out from the crowd.

The reason why Chevy is so popular in this particular community is that it is affordable. Even a lower-middle-class person can afford to buy a Chevy. Not only this, the vehicles are very highly durable and can withstand major modifications and wear and tear.  On one hand, the car was gaining popularity in the Black community and on the other hand the company was hiring more and more African-Americans and people of color in their dealerships, Detroit manufacturing plant and service and building department.

Slowly the bond between Chevy vehicles and the African American community started to grow deeper and deeper. Now you can see modified Chevys and many other cars in movies and music videos.

What’s your Reaction?
+1
0
+1
0
+1
0
+1
0
+1
0
Facebook Twitter Email
Previous article
Finance Institutions and Venture Funds Betting on Black Entrepreneurs
Next article
The Hidden Secrets of Africa – Islands to Go to in 2021